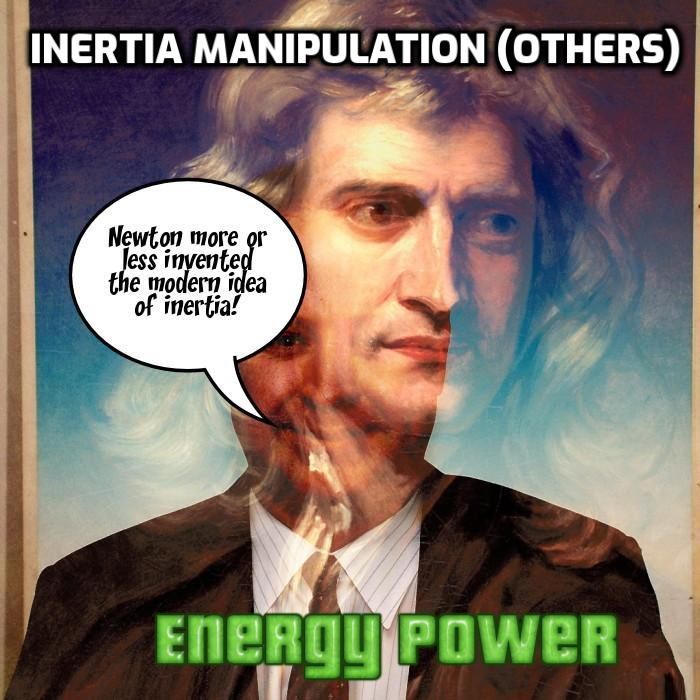 Inertia Manipulation (self) – The ability to affect the inertia of one’s own body. Superior physical strength can move with more strength or kinetic energy but some characters have a power above and beyond physical strength in that they can manipulate their inertia in such a way that even a stronger enemy cannot overcome them in specialized areas.  Inertia is the resistance of any physical object to any change in its position and state of motion. This includes changes to the object’s speed, direction, or state of rest. Inertia Manipulation (others/self) is also known as Adráneiakinesis and Inertia Control.

Juggernaut (Marvel) is unstoppable once he is moving. This is not a function of strength alone since even characters of equal or superior strength like Thor or the Hulk cannot stop him once he starts moving. Thor shows that the principle of Judo is the best way to handle the Juggernaut. Don’t try to stop the Juggernaut but go ahead and add some more force and move him somewhere he doesn’t like (Thor #429).

The Blob (Marvel) cannot be moved when he is a state of rest!  This is sometime explained as being done with a “mono-directional gravity field”.  Since no such thing exists, I am going to argue whatever the cause, the effect is an inertia once.  I prefer the “unusual power” explanation that Dr. X offers in the Blob’s fist appearance in Uncanny X-Men V1 #3.  Comments are welcome.