Obviously enhanced taste does not get used much in a fight but there is the comic book Chew (Image) that must be mentioned although the parody powers are more food than taste related.  The protagonist is cibopathic and below is a description of this very interesting superpower. 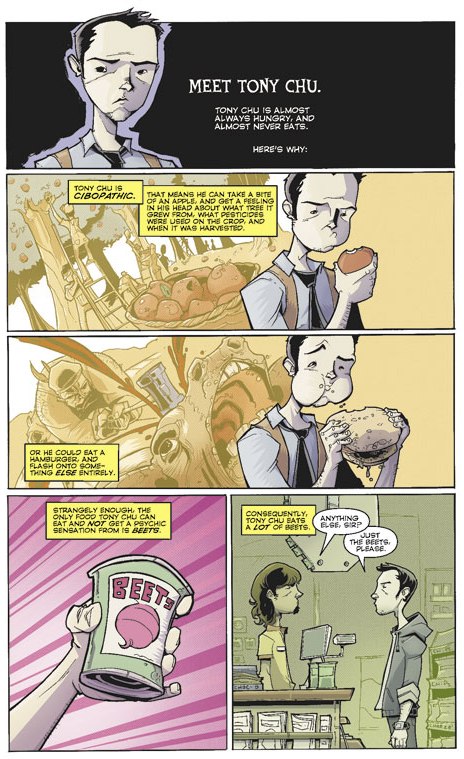 Below is a list of other taste/food related superpowers in Chew.

Bromaformutare – Able to take on the form of whatever he’s last eaten.

Cibolinguist – Able to speak the language of whatever nationality of dish they were cooking.

Cibolocutor – A Cibolocutor is able to communicate through food, and can also translate written works like plays, poems and operas into their food. Fantanyeros is a Cibolocutor.

Cibopath – A Cibopath can take a bite from anything and get a psychic sensation of what has happened to that object. The only thing it does not work on is beets. Tony Chu, Olive Chu, Mason Savoy, and The Vampire are Cibopaths. During the ‘Major League Chew’ arc, it is revealed that Tony, and possibly all Cibopaths, can absorb the abilities of who he eats. The Vampire and Olive Chu are also capable of absorbing abilities.

Cipropanthropatic – Able to see the memories of anyone nearby eating the same thing. Sage Chu, Toni’s sister, has this power.

Lubodeipnosophistes – Able to seduce anyone they dine with.

Mixosecerner – Able to create drinks that compel you to tell secrets.

Mnemcibarian – Able to create meals you could never forget.

Mnemocoquus – Able to cook memories into their dishes.

Peter Pilaf’s power – This so far unnamed power lets the user control people through food. Peter Pilaf has this power.

Punicacuratio – Able to eat pomegranates and experience a preternatural restorative effect alongside some other assorted anomalous benefits.

Sabopictor – A Sabopictor is able to paint a picture that tastes deliciously what it looks like. Quindim Buongiovanni is one of three living Sabopictors, though he is last seen being attacked and likely killed by The Vampire.

Saboscrivner – A Saboscrivner can write about food so accurately that people get the sensation of taste when they read about the food. Amelia Mintz is a Saboscrivner.

Special Agent Vorhees’s power – Seen through the series eating and mumbling, Special Agent Vorhees appears to have the ability to taste and identify every ingredient in whatever he’s eating. At this point, this power has not been formally introduced. Also, he may be immune to the powers of the other characters, as The Barista’s foam message had no effect on him (Though Caesar claims this is because Vorhees is illiterate).

Victuspeciosian – Able to craft a unique preparation out of food to make facial beauty masks that yield amazing transformational (although temporary) results. Judy Heinz-Campbell of Judy’s Beauties Beauty Salon & Boutique is a victuspeciosian.

A version of the Last Supper in Chew #15 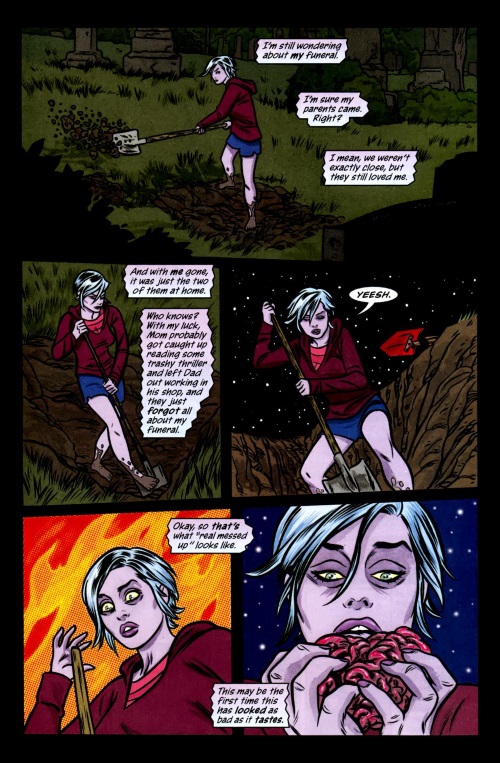 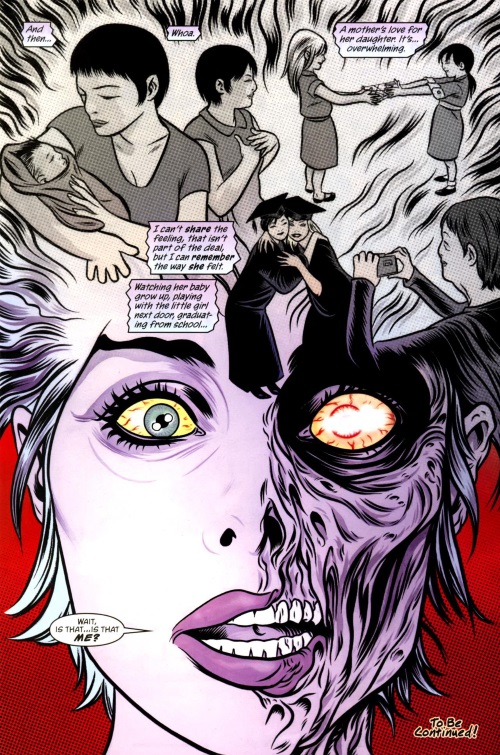